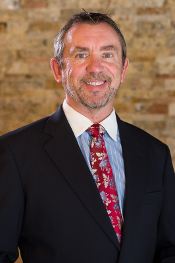 Mr. Spurlock received his B.S., with honors, from the University of Wisconsin-Madison in 1976. He received his law degree from Arizona State University in 1984. After law school, Mr. Spurlock served as a law clerk to the Honorable D.L. Greer, Arizona Court of Appeals, from 1984 to 1985.

Mr. Spurlock is a member of the Maricopa County Bar Association (Volunteer Lawyers Division), the State Bar of Arizona (Trial Practice and Bankruptcy Sections) and the American Bar Association. He is also a member of the Arizona Association of Defense Counsel, the American Bankruptcy Institute, and the National Association of Retail Collection Attorneys. In 2011, Mr. Spurlock became an adjunct professor of law at the Sandra Day O’Connor School of Law at Arizona State University. He currently teaches a class on civil remedies.

Mr. Spurlock has a diversified practice, but he focuses on two areas: creditors’ rights (including commercial litigation and bankruptcy) and the defense of real estate agents. Mr. Spurlock’s creditors’ rights practice makes him a frequent visitor to the bankruptcy courts of Arizona and the Southwest. He also protects the rights of his clients in Arizona’s tribal courts, and is honored to be admitted to the Gila River, Hopi, White Mountain Apache, Colorado River, Tohono O’odham, Fort Mohave, Hualapai and Yavapai Apache Bar Associations. Mr. Spurlock has been a featured speaker at seminars provided to and by Arizona’s largest real estate organizations, a national bank, and a large multi-national equipment manufacturer.

Mr. Spurlock devotes a healthy measure of his free time to coaching girls’ basketball. He is an assistant varsity coach at Thunderbird High School (the Arizona 4A state champions in 2002, 2003, 2005, and state qualifier for 23 consecutive years).